As I find myself journeying along the open road, I find myself thinking back to my younger days and my early inspirations. As a young traveler, I went to school in the small central California towns of Shingle Springs and El Dorado, and later Placerville. Placerville, California provided an easy setting for my young imagination to take me back in time to the early days of the gold rush in 1849. Back in my younger years, the late 1960s, time and population had not yet found its way to the area. Nowadays, the population has grown and much of that mystical setting I admired in my early years has now faded into the past.

In those years, I had not yet learned of the Lincoln Highway, but as the fates would have it, my family resided up the hill from the original Highway. Often my friends and I would journey down the road to the local shops and visit the ice cream parlor for a cool treat. In front of this haunt was an original Lincoln Highway marker, where we would hang our coats, not knowing the history it represented. Placerville had another marker that had been encased into one of the shops along the road. These days the shop from my past is long gone, having been replaced by a place to find a quick bite to eat. 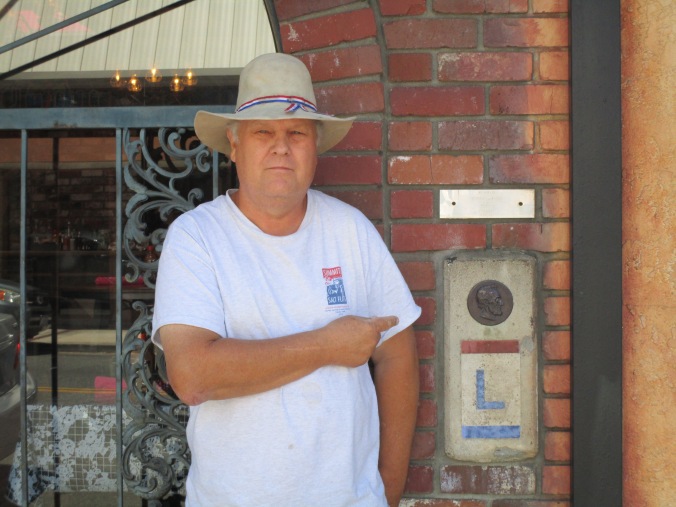 As you are aware, I have always been drawn to the tales of local history. This was no different in those young years, when my journeys led me to pick up a book with photos showing how the places I enjoyed everyday looked in the time of my imaginings. While we cannot journey back to those days, the pictures and stories shared allow a glimpse of that bygone time when gold was just being found in the hills and valleys of California.

One of my favorite towns in this area is Coloma, California, which you will find along Highway 49. History runs deep in this small town, as it is the location where gold was first discovered in California at Sutter’s Mill. As a young traveler, I enjoyed the field trips and outings to the old area, running wild amidst the historical buildings and museums.

One such building was Bell’s Store. Robert Bell, the store owner, established this beautiful brick building, displaying the wares of the day out in front. Bell’s Store was one of the first buildings put up after the Fire of 1856 which had destroyed much of the structures in this small town. A few years I painted a likeness of Bell’s Store, using acrylics on redwood, to showcase the lasting beauty of my favorite building in the area.

Even though the years have passed and my journeys have led me far away, I will always remember the settings of Placerville and beyond that inspired my young mind. As a miner ever seeks gold in the next big strike, I ever seek out adventure on the next road. 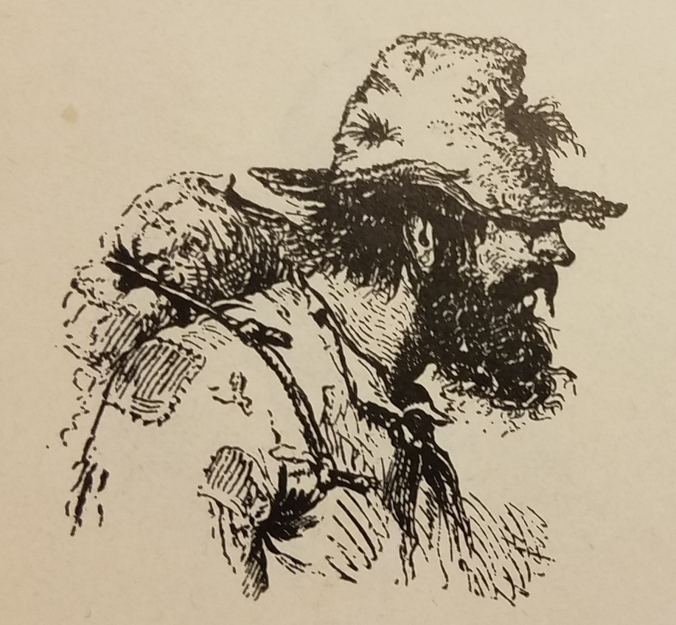 As I ventured along the Mother Road herself, Route 66, in Arizona, I found myself thinking of how this particular stretch is a tourist’s delight. Along the Route, you will find a bit of everything, from unique curio shops to many historical sites. Each town along the way gives Route 66 its own twist, which provides something for every person to enjoy. The stops draw the traveler in, inviting them to take a rest, enjoy a different part of the road’s history, and lessen the weight of their wallet along the way. While I try to avoid that last one, I thoroughly enjoy experiencing these different twists and appreciate how each town creates the atmosphere that keeps tourists coming back and experiencing the history of Route 66.

After exploring the many unique sights along Route 66, my destination came in sight. My journey along the Mother Road lead me to Jerome, Arizona, which can be found in the mountains to the southwest of Flagstaff. Like the Route itself, Jerome is filled with many unique shops and experiences, but truly is for those brave tourists who wish to experience a little of the days gone by. Jerome provides an Old West adventure in the form of a living ghost town, providing visitors with a glimpse into the past. 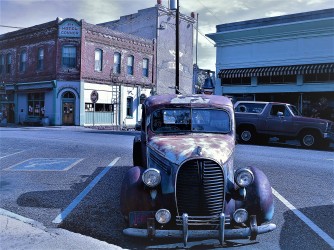 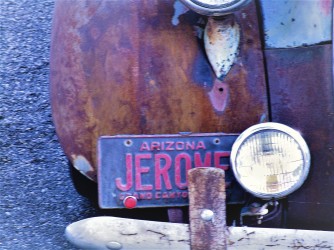 While in Jerome, if you venture past the fire station and journey down a long, skinny road, you will find yourself in the area previously known as Haynes, Arizona. About 30 years ago, a fellow Iowan by the name Don Robertson moved down to the area and created the historical complex known as the Gold King Mine and Ghost Town. I often wanted to venture out on this journey in years prior and meet Mr. Robertson, but I sadly was not able make the trip out until this past year. Although Mr. Robertson has journeyed on down the long road, his collection and work lives on, providing a glimpse into the past for folks like myself to enjoy for the years to come.

Whenever you find the need to get your kicks on Route 66, be sure to journey on down the Mother Road and bring along a friend, like my buddy in the drawing below, to enjoy the different twists along the way. Once you find yourself near Flagstaff, take a quick turn down to Jerome and to Mr. Robertson’s place and explore the many items he collected along his own journey. I guarantee that no matter where you find yourself as you journey along the great Route 66, the history of the road and the area will rise to meet you. 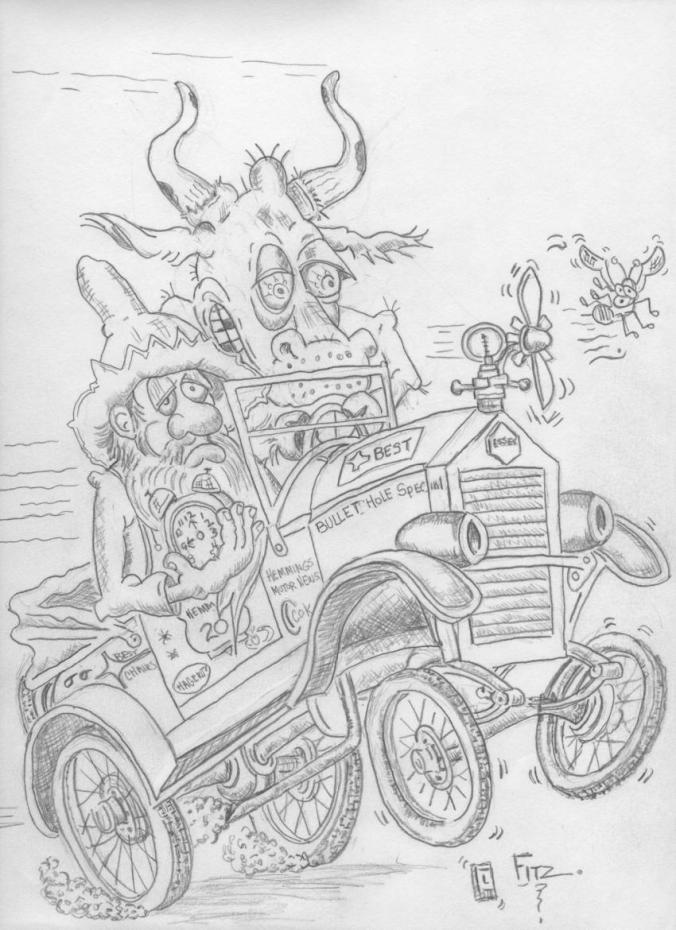 As you are well-aware, most of my works come from my trips along the open road or from my own history. However, another part of my journeys include reenacting history itself, in particular that war that set brother against brother, the Civil War.

Early in the fall each year, our group of Civil War reenactors, the Army of the Southwest, engage in a reenactment in Corydon, Iowa. This small town is located in Southeast Iowa on Highway 2. Now most towns in this area of my great state are farm-based communities, with a low population in the town itself. This reenactment takes places in the picturesque setting of the local park, with beautiful trees, a rolling landscape, and a quaint lake.

As a reenactor, I often vary between acting as a soldier for North or the South during our battles. When we are back camp-side, I take on a different role as a war correspondent. However, many of my fellow reenactors maintain their role as a solider while relaxing by the fires, which often inspires my art. I quickly sketched out the work below during this most recent event. 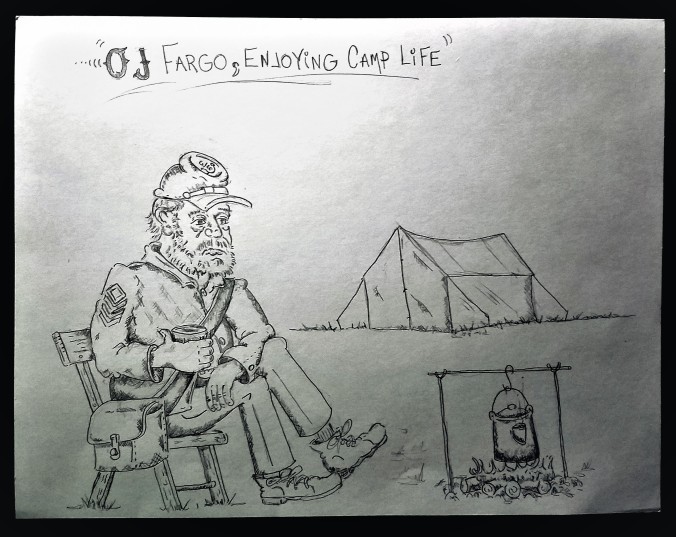 As the weather this year during our reenactment was not as inviting as years before, I decided to journey down the road about six miles to one of those other small towns, Allerton, Iowa. Now I happened across Allerton during a class reunion of sorts, which seemed to include former students from all the past graduating years. This reunion has a parade, a luncheon at the fire station, and activities to celebrate across the businesses in the community. I was fortunate enough to find a room at the Inn of the Six-Toed Cat, the local, and only, bed and breakfast in town. Now while I could regale you with the story behind this unique name, it is better coming from the cat’s mouth itself: Story of the Inn 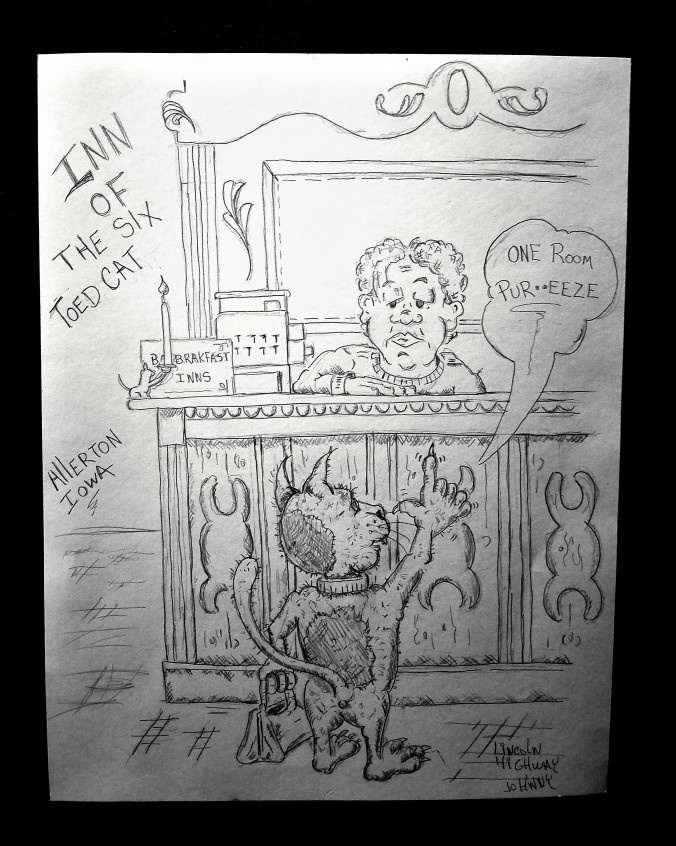 As I sat on the porch, enjoying the scenes of this old, unique inn, I took in the stormy weather around me. This weather did not seem to dampen the celebrations around the town, as I heard the sounds of folks coming together to share their heritage. Most years, as a part of the reunion celebrations, the Inn hosts a dinner with General Ulysses S. Grant. However, General Grant was unavailable this year, so in order to substitute for the man himself, I created the work below. 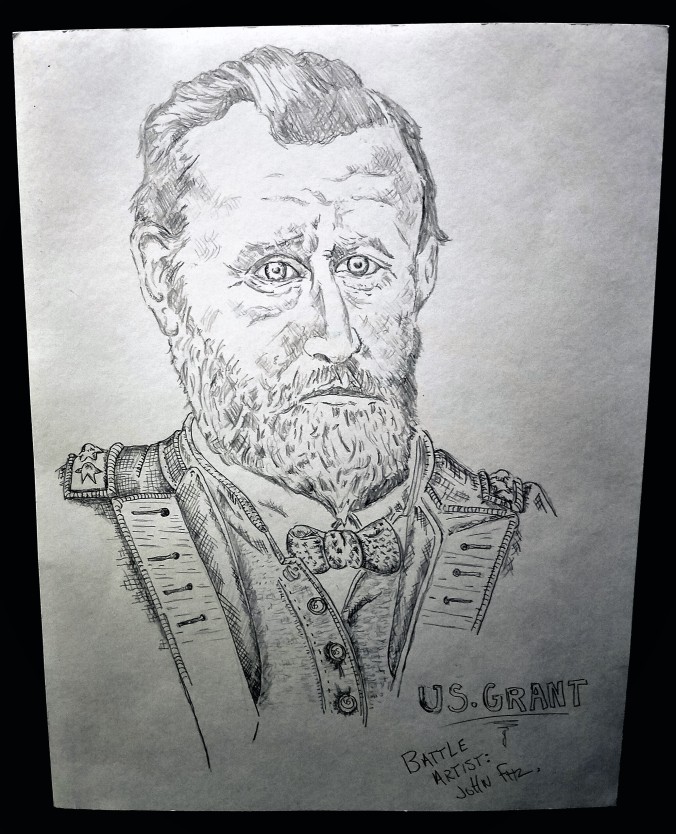 If you ever find yourself looking to embrace some local culture in Southeast Iowa, take a rest in Allerton and perhaps General Grant or a six-toed cat may stop by to make your visit as memorable as my own.